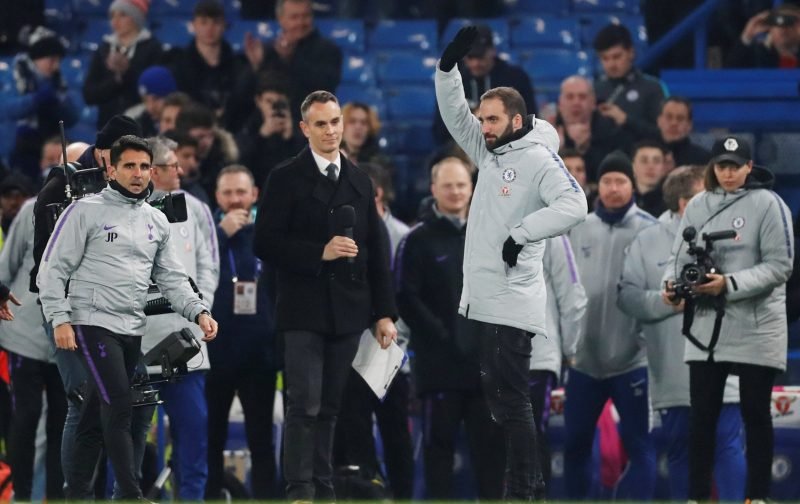 This Sunday, Chelsea welcome Sheffield Wednesday, to Stamford Bridge, for a FA Cup 4th round tie.

After the glory of Thursday night, when Chelsea reached the Carabao Cup Final, courtesy of a two-legged win over Tottenham Hotspur, the Chelsea faithful get another opportunity to sample the unique atmosphere cup ties generate at Stamford Bridge.

Sunday may also be the first opportunity the Chelsea support get to see the clubs only signing of the January transfer window so far, Gonzalo Higuain.

On Thursday, against Tottenham, Higuain was introduced to the Chelsea support and got a decent reception, the Argentine striker then sat with his new team-mates, on the bench, getting involved in urging the side on.

Yesterday, at the pre-match press conference, ahead of the tie with Sheffield Wednesday, Gianfranco Zola faced the media and, as reported by the BBC, inferred that Higuain might be given the opportunity to show what he could do, but then again the Sardinian wasn’t giving much away when he remarked:

“It is an opportunity, and there are players that need to be rested, but we haven’t discussed yet.”

But, with some of the Vital Chelsea members, including myself, not quite sure if the 31-year-old has what it takes to make an impact in the toughest domestic league in Europe, Gianfranco added:

“Everybody knows his best quality is his goalscoring record. He can score in many ways and I’m sure there are a lot of expectations on him. I’m also sure he is used to it and he has played for big clubs.

“He has always produced good numbers wherever he has been. This is not a team that is desperate. but it needs to add certain qualities to what it already has. He is coming late but he is playing in a system that he is used to and the type of players we have will help him to achieve his best. The conditions are good.”

Reading between the lines it would seem that Sarri and Zola have done their homework on this deal and know exactly what the Argentine striker can bring to the side.

Personally, I’d give him a start against Sheffield Wednesday, it could be the ideal opportunity for the player to make an instant impact and get any doubters, like myself, on side.

But what are your thoughts on the subject matter, would you start with Higuain or would you, after his performance on Thursday night, let Giroud have another start?