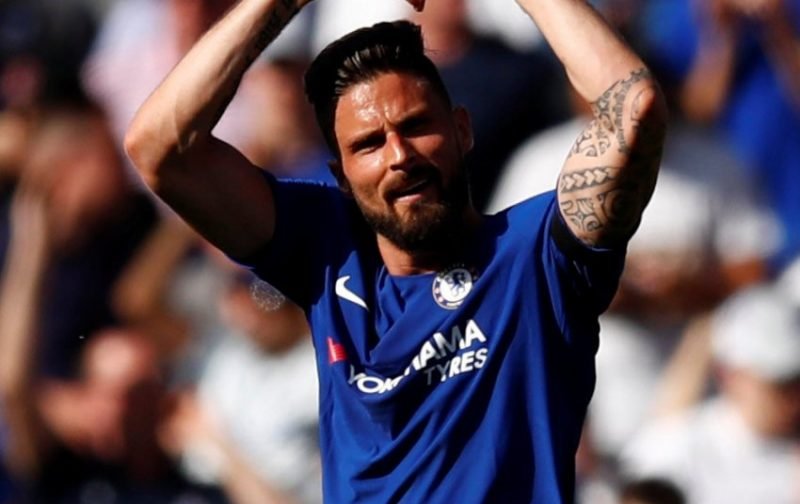 At Stamford Bridge, this afternoon, Chelsea ground out a win against Liverpool.

Neither side were at their best but the winning goal, from Olivier Giroud, ensured that Chelsea are very much in the race to qualify for the Champions League next season.

This weekend, both Liverpool and Tottenham Hotspur have conceded ground and, if Chelsea can beat Huddersfield Town on Wednesday night, the remaining qualifying places will go to the final weekend of the season.

The win, this afternoon, made it four wins on the trot for Chelsea, who are the form team going into the last week of the season.

Liverpool started the game well with Sadio Mane proving to be the main threat.

But, with thirty-two minutes played, after a period of Chelsea pressure, the Blues took the lead.

Moses persistence on the flank saw the wing-back deliver a ball into the box and Giroud, from a standing position, jumped the highest to flick the ball past Karius, the Liverpool keeper, into the net.

Leading 1-0 at half-time, Chelsea started the second-half on the front foot, but chances were at a premium.

Eden Hazard produced one startling piece of skill to leave three Liverpool defenders trailing in his wake before trying to beat Karius at his near post, but the keeper stuck out an arm and the ball bounced agonisingly the wrong side of the far post.

Jurgen Klopp introduced Dominic Solanke late on and the former Chelsea striker had two half-chances to level but couldn’t convert either.

Mo Salah, another former Chelsea player, had a quiet game and found himself going into the referee’s note-book after a clear dive near the edge of the area in the first-half.

It wasn’t Chelsea’s most fluent performance, but it’s results that matter as we hang on to our hopes of obtaining one of the four Champions League places available for next season.