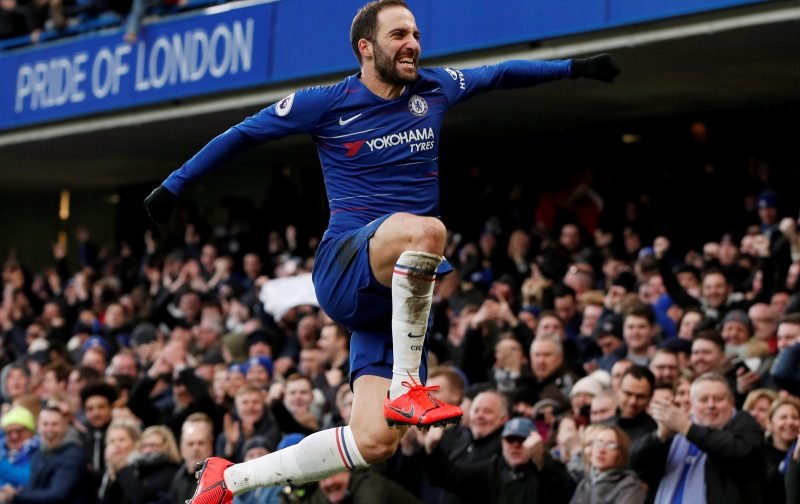 After the debacle of midweek, where Chelsea were not just out-played by Bournemouth, but crushed, it was good to get back to winning ways, yesterday, against Huddersfield Town.

But we shouldn’t get too carried away, the opposition arrived at Stamford Bridge as the bottom club in the Premier League and on an awful run of form.

Nevertheless, you can, as they say, only beat what is put in front of you.

The fixture also saw a certain Gonzalo Higuain make his home Premier League debut and it’s fair to say that the signing, albeit on loan, was something that divided the Vital Chelsea fraternity.

But it is fair to say that Higuain, against Huddersfield, matched up to what was expected of him, scoring a brace and showing the Chelsea support he knows where the net is.

However, despite those two goals, it is clear to see, on the social network media, the 31-year-old Argentine still divides opinion.

The postings below show typical comments left from those who applauded his work yesterday:

Higuain what we needed

Let the goals continues to pour.Keep it on Higuain

Lethal no. 9 curse finally lifted as we believe we finally have got the successor of @didierdrogba. Keep scoring @G_Higuain! #CFC

But others we encountered, adopted a more cautious attitude:

Let's see him against city first then we can talk

Don't get your hopes high lads os of yet, Morata also got a brace on his debut.

My personal view is that we should reserve judgement on Higuain, at least until the end of the month, when we’ve come through what is a particular testing spell of fixtures.

Chelsea’s Next Choice Of Manager Could Outrage Tottenham Supporters