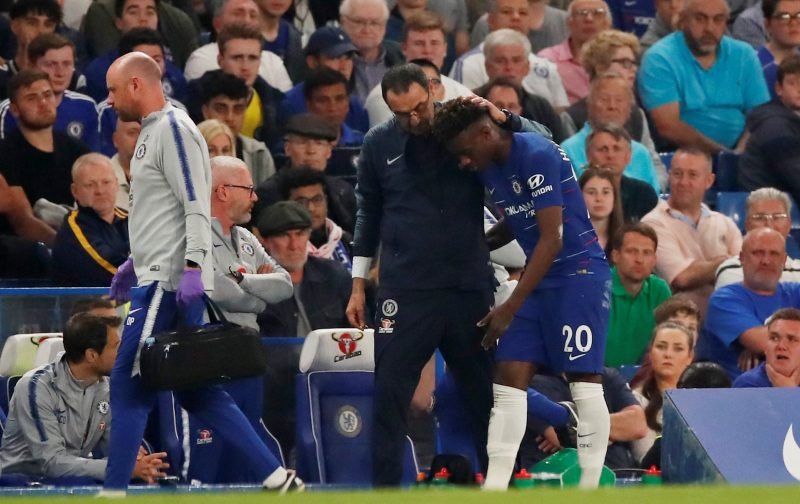 After watching as our rivals for a top four finish, Tottenham Hotspur, Arsenal and Manchester United, all lost their fixtures, the home game, against Burnley last night, seemed to be the perfect opportunity for Chelsea to make a statement of intent when it comes to securing that much-needed place in the 2019 / 2020 Champions League.

But it wasn’t to be.

After an entertaining first-half, which ended 2-2, Chelsea found themselves frustrated by a combination of dirge build up play and blatant time-wasting tactics by a Burnley side clearly happy with a point.

However, whilst we can all get judgemental and air our opinions on the kind of football that Chelsea are serving up under the managerial acumen of Maurizio Sarri, the night could well be remembered by the injury suffered by one of our talented youngsters.

Callum Hudson-Odoi, now getting the regular football many feel his talent deserves, was substituted in the forty-first minute with what was later diagnosed as a ruptured Achilles tendon.

Hudson-Odoi, naturally gutted at picking up such a devastating injury, and as reported by the BBC, tweeted:

“Really gutted to end my season with a ruptured Achilles, gotta work hard and try and come back stronger for next season!”

The injury also, we’d like to think, puts the kybosh on any planned summer move to Bayern Munich with the 18-year-old now fighting to recover from this cruel blow.

Here at Vital Chelsea we’d like to wish Callum a speedy recovery and we look forward to seeing perform in a Chelsea shirt again in the future.