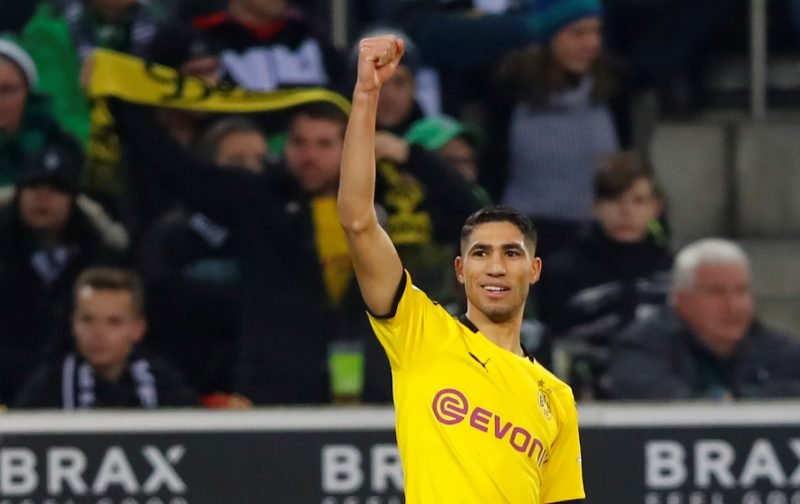 Only a matter of days ago another candidate was nominated, by the media, as a potential candidate for the Chelsea left-back position.

Here at Vital Chelsea, our article – the-name-of-another-defender-is-thrown-into-the-mix-as-chelsea-look-to-solve-that-problematic-left-back-position – covered the inference that Nicolas Taqliafico of Ajax could be our man.

Today, courtesy of The Mirror we can now add another name to what is, already, a growing list of names.

Hakimi, a Moroccan international, has spent this season on loan at Borussia Dortmund where he has made 37 appearances, scoring on 7 occasions and providing 10 assists.

However, despite having such an impressive season in the Bundesliga, his loan deal doesn’t contain an option for the move to be made permanent.

That’s a fact several clubs have picked upon on with the list including Bayern Munich as well as Chelsea.

But our source trots out the inference that Real Madrid, like many clubs, will not be making a decision on where the future of the 21-year-old until the 2019 / 2020 season finally reaches a conclusion.

Here at Vital Chelsea, it’s becoming more apparent to us, by the day, that a move for a left-back is something that will be orchestrated this summer but as to who the favourite is to join Chelsea, we’re none the wiser than you.

But if Hakimi is the chosen one he does have the advantage of being able to play at left-back, right-back and on the wing and is probably the most versatile of all the candidates so far.

Please feel free to air your views on the above subject matter in the comment facility beneath this article.