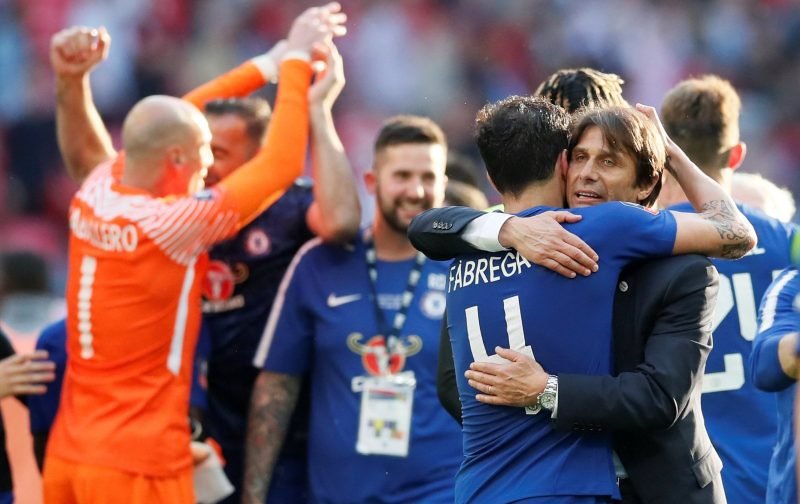 A rugged, dogged defensive display ensured a first-half penalty from Eden Hazard was enough to win Chelsea the 2018 FA Cup.

Antonio Conte surprised nobody with his team selection, opting to play a back three of Rudiger, Azpilicueta and Cahill, two wing-backs in the shape of Moses and Alonso, a midfield trio of Kante, Bakayoko and Fabregas with Hazard and Giroud up front. In goal, Courtois was selected which would have been disappointing for Caballero who had played in each of the previous rounds.

Manchester United got the action underway in a half that Chelsea were to have the better off. Eden Hazard, being man-marked by Ander Herrera, showed a glimpse of his skills early on when his shot, from an acute angle, was saved by the outstretched leg of David de Gea.

But, midway through the half, Chelsea did get the breakthrough they wanted. An exquisite pass by Cesc Fabregas saw Hazard bear down on goal, as the Belgian entered the penalty area, Phil Jones, with a desperate tackle, brought Hazard down and the referee, Michael Oliver, had no hesitation in awarding a spot-kick.

Hazard took responsibility for the spot-kick and coolly waited for De Gea to make his move before slotting the ball into the opposite side of the net. 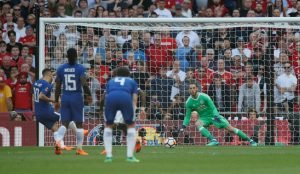 Manchester United’s best efforts in a half when they uncharacteristically gave the ball away too easily, came when Paul Pogba drove a shot wide and Jones steered a header wide from a deep cross.

Manchester United came out a different side in the second half pushing Chelsea back for long periods of the forty-five minutes.

At times it looked to be only a matter of time before they drew level but Courtois had other ideas pulling off a great save to deny Rashford.

As the pressure increased Courtois pulled off a wonderful save to deny Jones from equalizing with a header and when Sanchez netted the rebound those in blue were relieved to see the flag go up for offside. 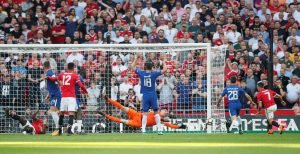 Chelsea could have doubled their lead when Kante burst through the middle and fed Alonso but the Spaniard saw his shot saved by De Gea. Seconds later Young clearly handled the ball but the referee waved play on.

As the half started to approach its conclusion Pogba had a glorious headed chance, from a cross, but headed wide.

Despite five minutes of stoppage time being announced, Chelsea held firm and the FA Cup was theirs.

It did, after all, turn out to be a BLUE day.