If Sarri Was Released, Is His Successor Already In Place? 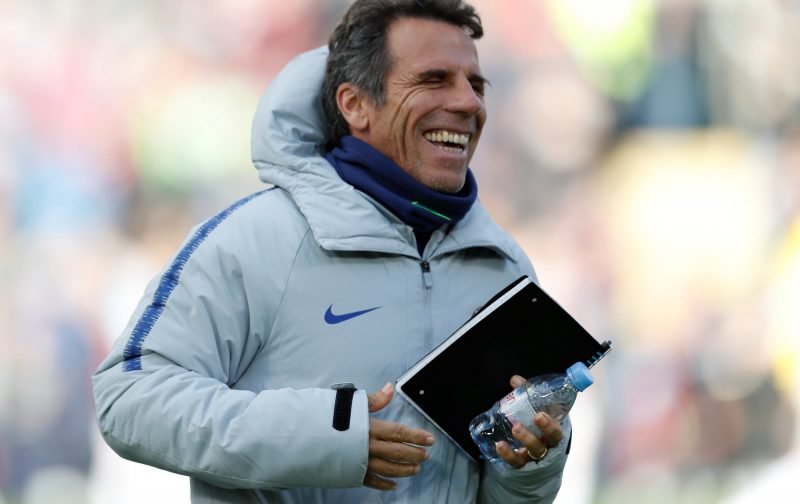 I have watched carefully both from the stands and on TV, the goings-on on the bench and wondered if and when the next change of manager at Chelsea takes place, who would take over.

The popular opinion, mostly media driven, is that Pochettino would be approached. Fair comment and he is indeed the manager that I wanted here when he was still at Southampton.

But for various reasons, including the Daniel Levy factor, I don’t think that this a viable option as it is likely to cost too much.

No, I am looking at the here and now and my search stops me a lot closer to home.

You see, until last weekend’s game against Huddersfield, I had seen little reaction from the coaches to our on-field play. Sarri usually runs the show and the remaining coaches appear to do very little. Very quiet and submissive even.

But the so-called post-match inquest immediately after the debacle of Bournemouth and the manner it was reportedly conducted made me think of a different proposition altogether.

For Sarri to have locked out his own coaching staff, it tells a story of mistrust and insecurity. Whilst these things do happen, I wonder how a person of Zola’s stature could have been excluded from that inquest and then I thought perhaps there is something more to this.

The manner of his overt criticism of the players, suggests that Sarri has encountered a phenomenon that he has not dealt with in the past.

Sarri needs time to get his philosophy fully functioning but he also needs to win something this year or he may struggle to hold onto his job. The only ray of light that shines on Sarri as compared with the Mourinho and Conte managerial endings is that the Board backed him in the January transfer window by getting Higuain.

Previously, when the inevitable was about to happen, neither Mourinho nor Conte could persuade the Board to buy players.

This may be the saving grace, but we’ll have to wait and see.

But going back to the present coaching set, I wonder what role Zola plays. Is he the good cop (he couldn’t be the bad cop even if he tried) or is he just an observer? Is he the eyes and ears of Roman Abramovich? If so, is this the problem that led Sarri to exclude Zola from a crucial meeting in the Bournemouth dressing room?

What could be Abramovich’s thinking?

A few years back, I recall Zola once alluding to a personal request made to him by Roman Abramovich to become manager of Chelsea. But Zola had reportedly told Abramovich that he was not ready for such a step up.

Now if this is true, then perhaps Zola has been placed as Assistant Coach by Chelsea to gain further experience, learn a new tactical philosophy “Sarriball” and prepare to take over one day.

You see, Sarri had his own assistant at Napoli but all of a sudden Zola arrives on the scene and to listen to Sarri and Zola and see their mannerisms, it’s like chalk and cheese.

The articulate and politeness personified of Zola against the prickly and seemly stubborn Sarri could not be more different. It is the “good cop, bad cop” scenario at its most obvious best.

But if you factor in Sarri’s age and difficulties with the press I fear change may well come.

When Zola arrived with his beaming smile as Assistant Coach, many of us assumed that our attackers would benefit immensely from one of our greatest attacking players, ever.

But apart from Hazard, all the other attackers are still churning out the same old dross from yesteryear.

I realise that Sarri has his philosophy and a predetermined way of playing, but one would have thought that Zola’s zest and zip play would also have shone through.

Where is the magic that Zola bestowed upon us whenever it was needed?

Willian and Pedro show no sign of improvement indeed it is fair to say they are both as predictably unpredictable as always.

Many of you would point out to Zola’s failed attempts at managing at football clubs and of course you would be right. And I am not suggesting that Zola is my choice to take over, as much as he is my second favourite Chelsea player ever, but I think that there may well be a plan in place.

I also think that the recent influx of former players from the golden era may have something to do with the future set up too.

Joe Cole, possibly Cech, Drogba have strategically been placed within the set-up. Will Ballack and Ashley Cole follow soon?

The thought of having such proven leaders back in the fold excites me. We need that bite that desire and determination back in the heart of our beloved Chelsea. Can you imagine an Academy being built on those virtues and youngsters ending up in the first team lead by men steel, men of guile, men of skill and most important of all, men of Chelsea!

I am going to stick my neck out and say, (I can sense the torrent of abuse heading my way already), that the new coaching set-up WHEN IT HAPPENS, will be as below:

This is what I believe, but what do you think?

Sarriball- Is It All Eggs In One Basket Or Counting Our Chickens Before They’ve Hatched?