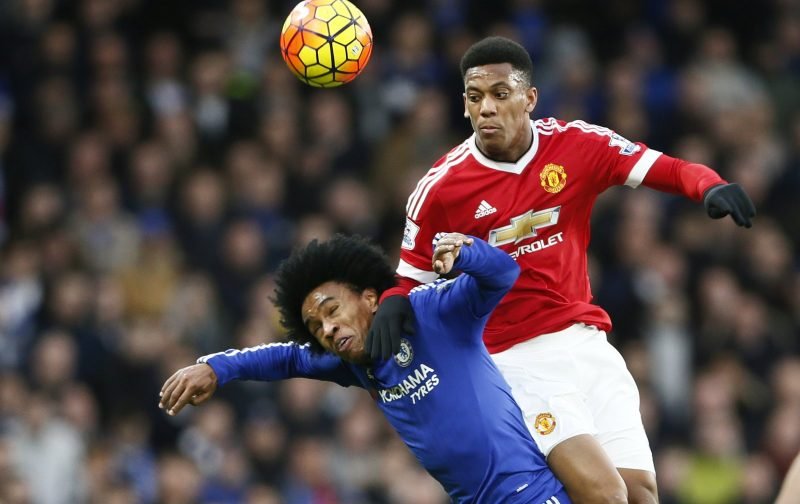 Since the arrival of Alexis Sanchez at Manchester United, Anthony Martial has found it hard to get any game time. His name is the latest to be mentioned as a possible Chelsea acquisition.

It’s believed that Jose Mourinho would be willing to let the French international leave the club, if the right offer came in. PSG are also monitoring the situation, that according to the Daily Star.

Quite why Mourinho would allow the youngster to leave is hard to fathom. This season he’s already made 42 appearances and scored 11 goals and grabbed 10 assists. As we know though, Mourinho’s judgement of young players is his Achilles heel, see Kevin de Bruyne and Mohamed Salah.

Whether the Manchester giants would allow Martial to move to a rival remains to be seen. One possibility could see Willian head in the opposite direction in some kind of swap scenario. Willian has made 50 appearances for Chelsea, scoring 13 goals and assisting in 12. Mourinho, we know is a big fan of the Brazilian. He was his shining light in that cataclysmic 2015-16 season.

There are many Chelsea fans who would probably delight in seeing the back of our Brazilian winger. At times this season, he’s been subject of unwarranted criticism. True football fans understand Willian’s contribution to Chelsea’s side this season. Generally, he’s been the ultimate team player. That persona dropped off slightly on Sunday at Wembley when he stormed down the tunnel following his substitution.

Willian is contracted at Chelsea until June 2020, Martial at United until June 2019. According to Transfermarkt, Willian is valued at £32m and Martial at £65m. Chelsea would have to open Roman’s tightly held pursestrings if there is to be any chance of Martial joining.

With the transfer window due to open around the 17th May, those negotiations could start after the two clubs have contested the FA Cup final on 19th May. The Premier League window closes, before the opening game of next season, at 5pm on 9th August 2018.