Sarriball- Is It All Eggs In One Basket Or Counting Our Chickens Before They’ve Hatched? 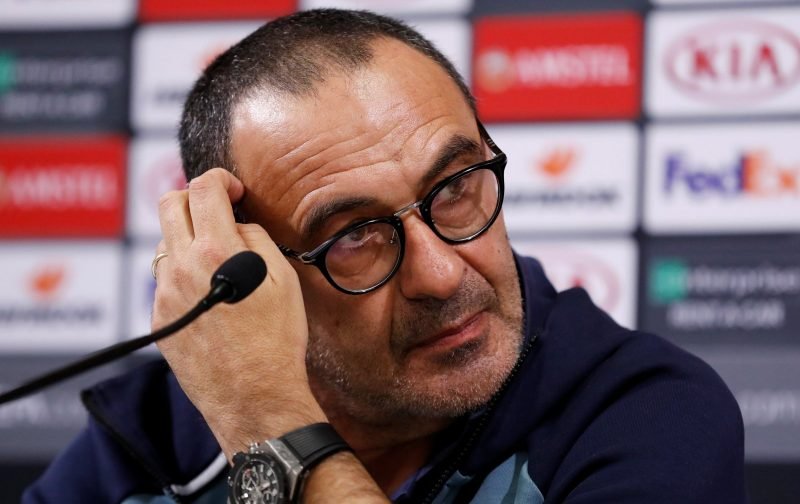 As I begin to write this article, I am still in shock after the debacle of Wednesday night at Bournemouth.

And let me be clear on this, Bournemouth deserved to win. I also want to repeat what I have stated in previous articles that I do not think that Sarri should be sacked. I fully understand that this project will take time and he should be given time to get it right.

But this repeated abject failure by Chelsea players to fight for the cause is now beyond a joke. Sarri has repeatedly said that the mental state of the players that he has inherited is weak. Fair point, because we have all wondered over the years why a defending Championship winning team can then disintegrate the following season.

We have often wondered whether the players can only be motivated for the big games when they hope to douse themselves with more personal glory. We the supporters lap it up when we win but deep down we’ve known for years that it wouldn’t last.

Sure enough, the following fixture, usually against one of the “lessor” teams would produce another shambolic display.

Why is it that, “world class” players can be reduced to pitiful standards at such ease?

Why is it that, all non-performing opposition players who hadn’t scored for say two years inevitably score against and then go on another long run of not scoring again?

Why is it that, teams at the bottom of the table always give us such a hard time?

Sarri lays the blame on the players’ mental state of minds. Apparently, he cannot motivate them. Apparently, as soon as we concede a goal the players have a “mental block” and start playing as individuals rather than as a team.

Apparently, the team does not adhere to Sarri’s philosophy.

Sarri could be right.

The first trophy that I saw my beloved Chelsea win was the 1970 FA Cup so I was used to not winning things. The love and passion that I had for my club remained undiminished throughout the barren years. We then had Roman arrive and transform the club into a leading brand.

We spent a lot of money (and wasted a lot too) but it was his money so it of no concern to me.

All I wanted was to cheer on my club, win, lose or draw.

It’s great to some world class players on the hallowed turf of Stamford Bridge. But equally enjoyable is to watch a player from the Academy progress and win a place in the team.

Bear with me, I have just given you some of the context of the article.

At the beginning of this season, we all arrived at Stamford Bridge with great expectations and to see a new brand of football. A brand of football that the mighty Pep Guardiola no less had lauded. Pep had stated that Sarri’s team was a joyful thing to behold.

We paid our dues and turned up in our thousands and for the first few games, it certainly looked pleasing to the eye but all was not well. Whilst the media praised the philosophy., there were signs from an early stage that everything centred around Sarri’s system and that it centred around a certain linchpin. This linchpin or catalyst was known as the Regista.

The Regista was pivotal to everything that happened and sure enough, the opposing managers worked out that stop the Regista, you stop the team. Ever since then we, have been calling out for a Plan B.

You see, when you go to matches and watch games live from the stands, you can see the formations and systems at work. And when we were in trouble, The Regista was still trying to do exactly as he had done when we were winning. The opposition would simply mark him out of the game as he was not only the focal point of the team but also, one of the slowest
and fragile members of the team. Simples. But sadly true.

At this stage and under these circumstances we need another option and in David Luiz, we circumvented the Regista role by passing wonderful long passes over the top. But to do this you need players up front who are willing to make those runs, attack the ball, be prepared to get clobbered if you miss time the run and finally and critically be able to shoot on the run and score.

Very much like the Kante goal a few games back that I wrote about.

We don’t even have the full-backs strong enough or fast enough to implement the philosophy. The full-backs are the ammunition supply source but we are hardly ever able to cross the ball on the run or prevent a cross coming in when we need to defend. We all know that one of the fundamental tasks of the winger/full back is to stop the opposition crossing the ball, don’t we?

In days gone by, we had Charlie Cooke and Peter Houseman who could put a ball on a sixpence on the run without the need to stop or cut in or simply pass backwards. Where are you Cookey?

Sarri has publicly criticised the players but he needs to think about his own mental state of mind. I do not mean this in a derogatory manner. I am saying that he needs to assess that maybe his system needs to be modified a little.

Has he over-relied on the Regista role and exposed a perfectly talented player to ridicule and abuse? Has he created a target so obvious to the opposition teams, that he has dismantled his philosophy through his own reluctance to try something different?

Sarri is beginning to show signs of bemusement and dare I say it, mental fatigue.

He needs to accept that the players that he has cannot play Sarriball but as they’ve shown over the years, they can play football.

He needs to recognise that opposition teams are not frightened by Sarriball. Indeed, Eddie Howe commented after the game that he told his team not to worry if Chelsea had the ball. In other words, they can’t hurt you.

What an indictment of Sarriball.

We are over-reliant on Sarriball and thought we had found the revolution to transform our playing style. We thought we would seriously challenge for the Premier League but at the moment, I don’t think that we are there.

I also, don’t think that there is any one person responsible for this state of affairs, but Sarri is the driver of the team and he needs to look at himself first, with an open mind. We can accept failure but we will not accept meek surrender.

We need change and sometimes change only needs a minor tweak.

Persisting with the Willian and Pedro non-wing play instead of playing Hudson-Odoi will haunt him if he doesn’t change.

Insisting on Kante playing in front of Jorginho, will continue to cause untold problems for him. And in the event that Sarri departs, the first thing that the next manager will do is to restore Kante back to his world best position.

Playing Kovacic in front of Ruben Loftus-Cheek is well, just silly. A fully fit RLC, Ampadu and CHO need to be integrated sooner rather than later.

I admire Sarri for sticking to his guns but most supporters, pundits and opposition teams can’t all be wrong.

Sarri – Forty Thousand Spies Watch Your Team Every Other Week. Ask Them To Help You.