Eight games into the new Premier League season and Chelsea are unbeaten.

Since Maurizio Sarri began his first campaign in the managerial hot-seat Chelsea have won 6 and drawn 2 of their 8 fixtures.

Currently, Chelsea are deprived of the top spot in the Premier League table by goal difference with it being inferred that the title race will be between Manchester City and Liverpool who, on Sunday, fought out what I thought was a drab draw, with the entertainment only peaking when Mahrez saw his penalty sail over the bar and hit the man sat in row Z.

Following Chelsea’s comfortable win over Southampton, at St Mary’s, Maurizio Sarri, once again, played down Chelsea’s chances of winning the title remarking to the BBC:

“I think the same as I did a week ago. I think Manchester City and Liverpool are a step in front of us so we are working to cover the gap.”

But, is Maurizio secretly playing down our chances? 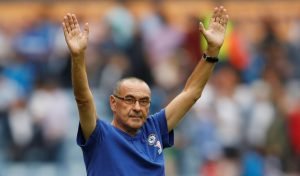 Could Chelsea go on to surprise the pundits and lift the Premier League title next May?

Please feel free to vote in our poll below:

It’ll be interesting to see how this one goes.